By CJ Hinke
Excerpted from Free Radicals: War Resisters in Prison by CJ Hinke, forthcoming from Trine-Day in 2016. 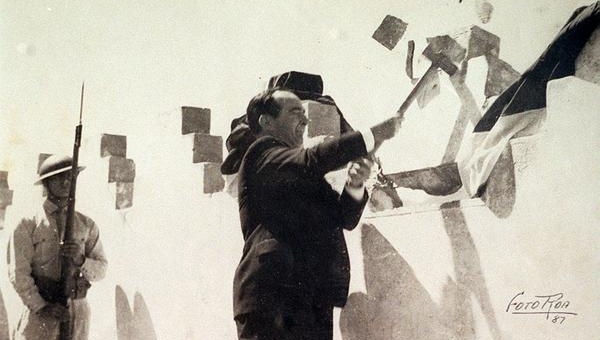 The 22 countries which have abolished their militaries or were founded without one are uniformly tiny, isolated, and often island nations. In many cases, these states maintain national police or paramilitary forces for internal protection (some might say from their own citizens in the event of a popular uprising to effect regime change), maritime defence patrols, or are defended by their former colonial masters. Some might say they are at little risk of invasion because there’s nothing more to take and few to fight back!

Although countries with armies may be more complex and have extensive economic and foreign policy agendas, there is no reason why they, too, could not take the first step in abolishing their large and costly militaries. One country’s standing army can only be an implied threat against other nations. When a country has an army, there is every incentive to put it to aggressive use.

Bluntly stated, war is illegal under international law. All member states of the United Nations signed its Charter in 1945: “All Members shall refrain in their international relations from the threat or use of force against the territorial integrity or political independence of any State, or in any other manner inconsistent with the Purposes of the United Nations.” The ‘purposes’ in Chapter I of the Charter are focused on the need “to maintain international peace.” The Preamble to the Charter emphasise its purpose: “to save succeeding generations from the scourge of war, which twice in our lifetime has brought untold sorrow to mankind.”

Reiterating this principle in 1970, the UN passed its Declaration on Principles of International Law Concerning Friendly Relations and Co-operation Among States in Accordance with the Charter of the United Nations: “No State or group of States has the right to intervene, directly or indirectly, for any reason whatever, in the internal or external affairs of any other State. Consequently, armed intervention and all against its political, economic and cultural elements, are in violation of international law.”

If this were not compelling enough evidence for the total illegality of war, nations have also signed to the General Treaty for Renunciation of War as an Instrument of National Policy, sometimes known as the “Peace Pact of Paris” or the “Kellogg-Briand Pact” of 1928. Article II stipulates: “The High Contracting Parties agree that the settlement or solution of all disputes or conflicts of whatever nature or of whatever origin they may be, which may arise among them, shall never be sought except by pacific means.” It was this treaty under which Nazis were prosecuted at Nuremburg.

Incidentally, all these compacts remain on the official website of the U.S. Department of State where is stated, “[T]he fact that a State’s domestic law does not provide for a penalty with respect to a violation of international law does not relieve a person from responsibility for that act under international law.” This means that every soldier, every officer, every contractor, every politician must be found guilty of crimes against humanity.

If not preparing for war, why does any country have any army? If wars are illegal, certainly so should be armies!

As the modern world works, with the cooperation of the United Nations, countries with or without standing armies are unlikely to be invaded by their neighbours. More is to be gained by economic agreement. Sell me yours and I’ll sell you mine.

However, there are a lot of vested interests and huge profits to be made in arms sales and military conflict which the biggest players are loath to give up. Corporate profits must be increased, lobbyists must be supported, bonuses must be paid, and the economy must keep inflating. After all, only the ordinary soldiers and civilians suffer while the politicians and fatcats keep stuffing their wallets.

Although they still have a standing military, South Africa had nuclear weapons and, to date, is the only nation with enough good sense to give them up and dismantle their six warheads. (Nine brain-damaged ostriches remain to keep the ‘assurance’ in “Mutually-Assured Destruction”.)  Argentina, Brazil, South Korea, Sweden, and Taiwan all have standing militaries but abolished their plans for nukes. Following the breakup of the Soviet Union in 1991, Kazakhstan, Belarus, and Ukraine dismantled their resident nuclear arsenals.

There are nine nations with atomic weapons. Five of them, the U.S., Russia, United Kingdom, France, and China, are signatory to the UN’s Nuclear Non-Proliferation Treaty of 1970, pay it no attention, and act with impunity. India and Pakistan also have the bomb but haven’t signed any regulatory treaties. North Korea and Israel both have nukes and seem to be no more rogue states than the big ones.

This nuclear ‘club’, (as in what a caveman carries), consists of countries which either stole the weapons technology or were given it by the U.S. None of these governments mention ever giving up their nukes. Meanwhile, Russia and the U.S. are modernising and expanding their atomic arsenals.

Just one big country needs to start this trend. Envision a world without war, where differences are solved through mutually beneficial agreement. War is often excused with some feeble excuse that violence is human nature.

In the 21st-century, it’s just a bad habit. Long term, wars solve nothing by the imposition of military force because the roots of conflict have never been resolved.

Give up armies and finally have enough money to create a satisfied citizenry and working economy. Free education through trades apprenticeships and tertiary, universal free healthcare including teeth, eyes, medications and lifelong disability and treatment; full childcare and eldercare; free public transportation; long-term maternal and paternal work leave and holidays long enough to mean something; full free housing for all; interest-free home mortgages; genuine social security even when one stops working at any age; and even, yes, an annual income from the surplus guaranteed to each man, woman, and child from birth to death.

You—yes, I’m talking to you!— are the taxpayer who pays for your country’s military. That’s a good first place to start supporting peace as an individual. Stop paying war taxes, more than 53¢ of every tax dollar paying for wars past, present, and future in the United States.

All countries need to do to build that perfect world is give up their militaries. Ill-defined concepts of national security and national pride mean nothing—people do.

Imagine a world with no war, then make it happen. Start with your country! How about Thailand?

Grenada
Population: 110,000
Abolished its military in 1983, following a US invasion
Paramilitary police force
Protected by the Regional Security System

Marshall Islands
Population: 68,480
Maritime Surveillance Unit
Protected by the US under the Compact of Free Association

Nauru
Population: 10,084
Founded without a military in 1968
Protected by Australia

Palau
Population: 17,948
Founded without a military in 1994
Maritime Surveillance Unit

Samoa
Population: 194,320
Founded without military in 1962
Protected by New Zealand

Manuel A. González Sanz, “Costa Rica celebrates 66th anniversary of the abolition of its army”, The Tico Times, December 1, 2014 http://www.ticotimes.net/2014/12/01/costa-rica-celebrates-66th-anniversary-of-the-abolition-of-its-army