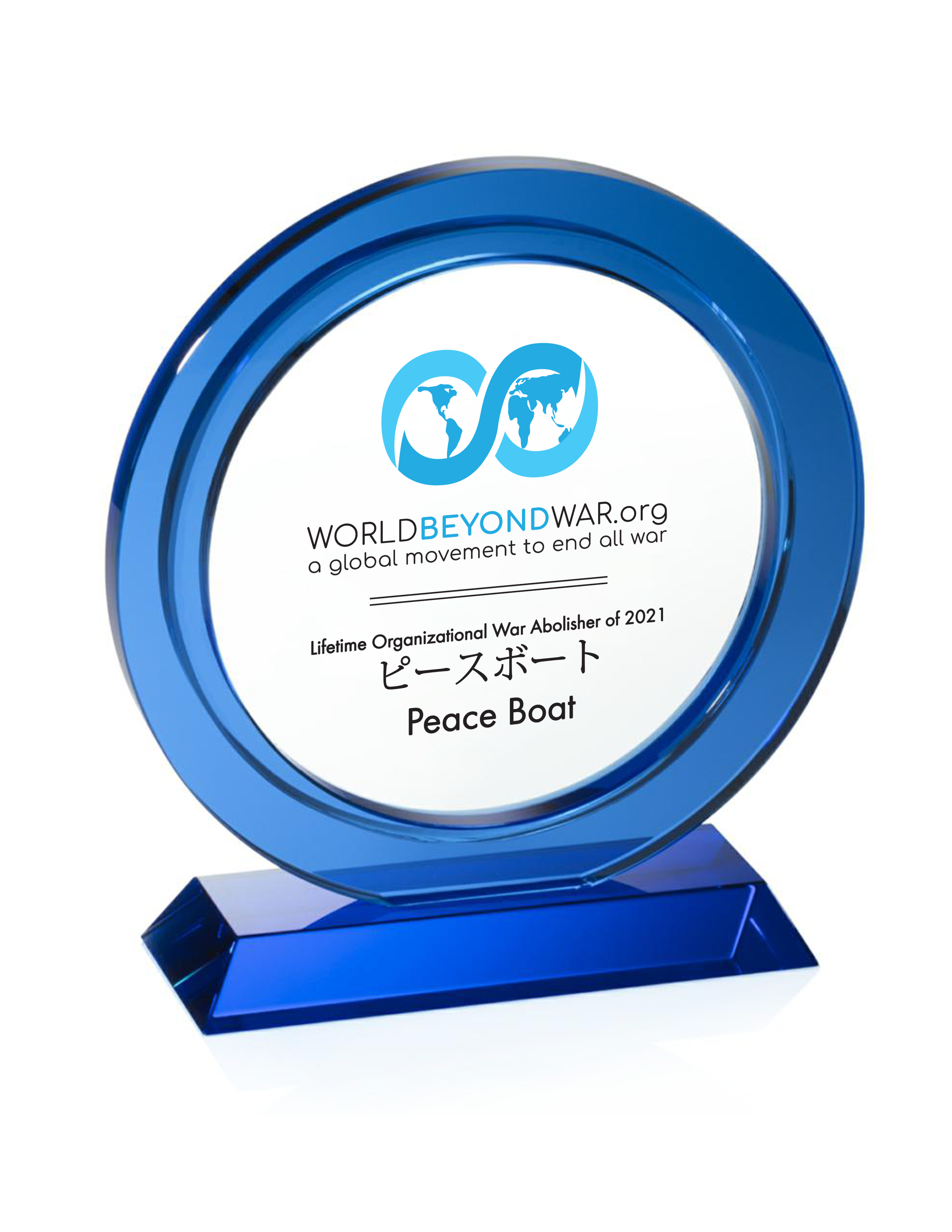 Today, September 13, 2021, World BEYOND War announces as the recipient of the Lifetime Organizational War Abolisher of 2021 award: Peace Boat.

An online presentation and acceptance event, with remarks from representatives of Peace Boat will take place on October 6, 2021, at 5 a.m. Pacific Time, 8 a.m. Eastern Time, 2 p.m. Central European Time, and 9 p.m. Japan Standard Time. The event is open to the public and will include presentations of three awards, a musical performance, and three breakout rooms in which participants can meet and talk with the award recipients. Participation is free. Register here for Zoom link.

Accepting the award on behalf of Peace Boat on October 6 will be Peace Boat Founder and Director Yoshioka Tatsuya. Several other people from the organization will attend, some of whom you can meet during the breakout room session.

The purpose of the awards is to honor and encourage support for those working to abolish the institution of war itself. With the Nobel Peace Prize and other nominally peace-focused institutions so frequently honoring other good causes or, in fact, wagers of war, World BEYOND War intends its award to go to educators or activists intentionally and effectively advancing the cause of war abolition, accomplishing reductions in war-making, war preparations, or war culture. Between June 1 and July 31, World BEYOND War received hundreds of impressive nominations. The World BEYOND War Board, with assistance from its Advisory Board, made the selections.

The awardees are honored for their body of work directly supporting one or more of the three segments of World BEYOND War’s strategy for reducing and eliminating war as outlined in the book “A Global Security System, An Alternative to War.” They are: Demilitarizing Security, Managing Conflict Without Violence, and Building a Culture of Peace.

Peace Boat’s first voyage was organized in 1983 by a group of Japanese university students as a creative response to government censorship regarding Japan’s past military aggression in the Asia-Pacific. They chartered a ship to visit neighboring countries with the aim of learning first-hand about the war from those who had experienced it and initiating people-to-people exchange.

Peace Boat made its first around-the-world voyage in 1990. It has organized more than 100 voyages, visiting more than 270 ports in 70 countries. Over the years, it has done tremendous work to build a global culture of peace and to advance nonviolent conflict resolution and demilitarization in various parts of the world. Peace Boat also builds connections between peace and related causes of human rights and environmental sustainability — including through the development of an eco-friendly cruise ship.

Peace Boat is a mobile classroom at sea. Participants see the world while learning, both onboard and at various destinations, about peacebuilding, through lectures, workshops, and hands-on activities. Peace Boat collaborates with academic institutions and civil society organizations, including Tübingen University in Germany, Tehran Peace Museum in Iran, and as part of the Global Partnership for the Prevention of Armed Conflict (GPPAC). In one program, students from Tübingen University study how both Germany and Japan deal with understanding past war crimes.

Peace Boat is one of the 11 organizations forming the International Steering Group of the International Campaign to Abolish Nuclear Weapons (ICAN), which was awarded the Nobel Peace Prize in 2017, the prize that in recent decades, according to Nobel Peace Prize Watch, most faithfully lived up to the intentions of Alfred Nobel’s will through which the prize was established. Peace Boat has educated and advocated for a nuclear-free world for many years. Through the Peace Boat Hibakusha project, the organization works closely with atomic bomb survivors of Hiroshima and Nagasaki, sharing their testimonies of the humanitarian impact of nuclear weapons with people around the world during global voyages and recently through online testimony sessions.

Peace Boat also coordinates the Global Article 9 Campaign to Abolish War which builds global support for Article 9 of the Japanese Constitution — for maintaining and abiding by it, and as a model for peace constitutions around the world. Article 9, using words nearly identical to the Kellogg-Briand Pact, states that “the Japanese people forever renounce war as a sovereign right of the nation and the threat or use of force as means of settling international disputes,” and also stipulates that “land, sea, and air forces, as well as other war potential, will never be maintained.”

Peace Boat engages in disaster relief following disasters including earthquakes and tsunamis, as well as education and activities for disaster risk reduction. It is also active in landmine removal programs.

Peace Boat holds Special Consultative Status with the Economic and Social Council of the United Nations.

Peace Boat has around 100 staff members who represent diverse ages, education histories, backgrounds, and nationalities. Nearly all staff members joined the Peace Boat team after participating in a voyage as a volunteer, participant, or guest educator.

Peace Boat’s Founder and Director Yoshioka Tatsuya was a student in 1983 when he and fellow students started Peace Boat. Since that time, he has authored books and articles, addressed the United Nations, been nominated for the Nobel Peace Prize, led the Article 9 Campaign to Abolish War, and been a founding member of the Global Partnership for the Prevention of Armed Conflict.

Peace Boat’s voyages have been grounded by the COVID Pandemic, but Peace Boat has found other creative ways to advance its cause, and has plans for voyages as soon as they can be responsibly launched.

If war is ever to be abolished, it will be in great measure due to the work of organizations like Peace Boat educating and mobilizing thinkers and activists, developing alternatives to violence, and turning the world away from the idea that war can ever be justified or accepted. World BEYOND War is honored to present our very first award to Peace Boat.