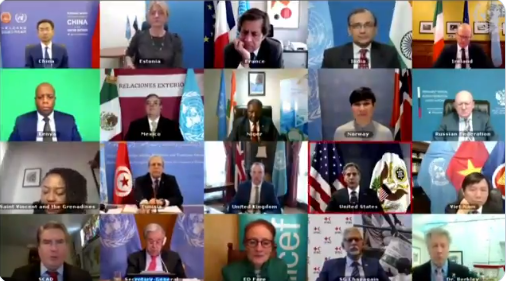 Agence France-Presse reports that the 15-member United Nations Security Council will hold a video-conference summit this coming Tuesday February 23 to discuss the impact of “global warming on world peace.”

Little is known about the agenda, but an ambassador has commented it “will be focused on the security aspects of climate change.” There is also the suggestion that a special UN envoy post on climate-related security risks could be created whose job it would be to improve UN efforts involving risk assessment and prevention.

At their meeting, the UN Security Council members should:

Acknowledge the climate impacts of militarism

War drives climate change. For example, the Iraq war was responsible for 141 million tonnes of carbon emissions in its first four years.

Costs of War has highlighted: “The U.S. Department of Defense is the largest institutional consumer of fossil fuels in the world and a key contributor to climate change. Between 2001 and 2017, the U.S. military emitted 1.2 billion metric tons of greenhouse gases. More than 400 million metric tons of greenhouse gases are directly due to war-related fuel consumption. The largest portion of Pentagon fuel consumption is for military jets.”

And yet while the automatic exemption the military had under the Kyoto Protocol was removed in the Paris climate agreement, it is still not mandatory for signatory countries to track and reduce their military carbon emissions.

Stephen Kretzmann of Oil Change International says: “If we’re going to win on climate, we have to make sure we are counting carbon completely, not exempting different things like military emissions because it is politically inconvenient to count them. The atmosphere certainly counts the carbon from the military, therefore we must as well.”

Phyllis Bennis of the Institute for Policy Studies has written: “To fund the Green New Deal, with all of its component parts, we must transition away from the current war economy that pollutes the planet, distorts our society, enriches only the war profiteers.”

While the $1.917 trillion is driving militarization, $5.2 trillion in annual public subsidies to oil and gas corporations is fuelling climate breakdown.

At the same time, the world’s wealthiest countries are falling short of meeting their COP15 climate summit pledge of $100 billion a year in climate financing intended to support developing countries build resilience to climate impacts and align their development strategies to a net zero carbon future.

The Feminist Foreign Policy Working Group recently noted: “Human rights defenders advocating for environmental protection and in support of their rights to territory, land, and water – often in the face of intensive resource development projects – face increasing criminalization, threats, and violence around the world.”

The Working Group then recommended: “Climate financing initiatives must recognize the threats to these activists and must include direct support to them [to] enable these courageous activists to carry out their work in safety and dignity.”

The United Nations COP26 climate summit will take place on November 1-12 in Glasgow, Scotland. Prior to that, US President Joe Biden will host a Leaders’ Climate Summit on April 22 aimed at catalyzing greater climate ambition at COP26.

To avert the worsening human rights catastrophe of climate change and help stop the killing of hundreds of land defenders every year, the UN Security Council must commit to climate justice and a profound shift in spending priorities.