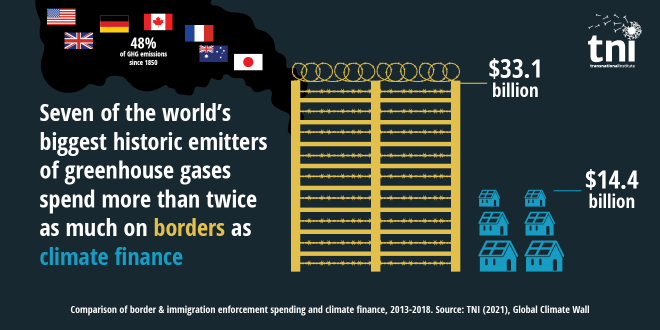 This report finds that the world’s biggest emitters are spending an average 2.3 times as much on arming borders on climate finance, and up to15 times as much for the worst offenders. This “Global Climate Wall” aims to seal off powerful countries from migrants, rather than addressing the causes of displacement.

Download the full report here and the executive summary here.

The world’s wealthiest countries have chosen how they approach global climate action – by militarising their borders. As this report clearly shows, these countries – which are historically the most responsible for the climate crisis – spend more on arming their borders to keep migrants out than on tackling the crisis that forces people from their homes in the first place.

This is a global trend, but seven countries in particular – responsible for 48% of the world’s historic greenhouse gas (GHG) emissions – collectively spent at least twice as much on border and immigration enforcement (more than $33.1 billion) as on climate finance ($14.4 billion) between 2013 and 2018.

These countries have built a ‘Climate Wall’ to keep out the consequences of climate change, in which the bricks come from two distinct but related dynamics: first, a failure to provide the promised climate finance that could help countries mitigate and adapt to climate change; and second, a militarised response to migration that expands border and surveillance infrastructure. This provides booming profits for a border security industry but untold suffering for refugees and migrants who make increasingly dangerous – and frequently deadly – journeys to seek safety in a climate-changed world.

Climate-induced migration is now a reality

The border security industry is profiteering from climate change

This nexus of power, wealth and collusion between fossil fuel firms and the border security industry shows how climate inaction and militarised responses to its consequences increasingly work hand in hand. Both industries profit as ever more resources are diverted towards dealing with the consequences of climate change rather than tackling its root causes. This comes at a terrible human cost. It can be seen in the rising death toll of refugees, deplorable conditions in many refugee camps and detention centres, violent pushbacks from European countries, particularly those bordering the Mediterranean, and from the US, in countless cases of unnecessary suffering and brutality. The International Organization for Migration (IOM) calculates that 41,000 migrants died between 2014 and 2020, although this is widely accepted to be a significant underestimate given that many lives are lost at sea and in remote deserts as migrants and refugees take increasingly dangerous routes to safety.

The prioritisation of militarised borders over climate finance ultimately threatens to worsen the climate crisis for humanity. Without sufficient investment to help countries mitigate and adapt to climate change, the crisis will wreak even more human devastation and uproot more lives. But, as this report concludes, government spending is a political choice, meaning that different choices are possible. Investing in climate mitigation in the poorest and most vulnerable countries can support a transition to clean energy – and, alongside deep emission cuts by the biggest polluting nations – give the world a chance to keep temperatures below 1.5°C increase since 1850, or pre-industrial levels. Supporting people forced to leave their homes with the resources and infrastructure to rebuild their lives in new locations can help them adapt to climate change and to live in dignity. Migration, if adequately supported, can be an important means of climate adaptation.

Treating migration positively requires a change of direction and greatly increased climate finance, good public policy and international cooperation, but most importantly it is the only morally just path to support those suffering a crisis they played no part in creating.