The USA Today, drawing on the work of the Cost of War Project, Quincy Institute, David Vine, William Hartung, and others, has gone beyond the limits of every other big corporate U.S. media outlet, and beyond what any member of the U.S. Congress has done, in a big new series of articles on wars, bases, and militarism.

There are significant shortcomings, some of them (such as absurdly low estimates of deaths and financial costs) originating with the Cost of War Project. But the overall achievement is — I hope — groundbreaking.

The first headline is: “‘A reckoning is near’: America has a vast overseas military empire. Does it still need it?”

The premise is deeply flawed:

“For decades, the U.S. has enjoyed global military dominance, an achievement that has underpinned its influence, national security and efforts at promoting democracy.”

Promoting what? Where has it ever promoted democracy? The U.S. military arms, trains, and/or funds 96% of the most oppressive governments on earth by its own reckoning.

National security? The bases generate wars and antagonism, not security.

Later in the very same article, we read: “‘In all these wars the U.S. has expended so much in terms of blood and treasure with actually very little to show for it,’ said Hartung of the Center for International Policy. ‘A reckoning is near.’ It’s difficult to point to a single location where a post-9/11 U.S. military intervention has led to either a thriving democracy or measurably reduced terrorism, he said.”

The statistics are weak:

“The Department of Defense spends more than $700 billion a year on weaponry and combat preparedness – more than the next 10 countries combined, according to economic think tank the Peter G. Peterson Foundation.”

But, who cares if the numbers are wrong and the pretense is maintained that occupying the globe made sense prior to this moment? This article outlines the extent of the empire of bases and suggests that they may no longer be “needed”:

“Yet today, amid a sea change in security threats, America’s military might overseas may be less relevant than it once was, say some security analysts, defense officials and former and active U.S. military service members. ”

The author even proposes a shift from generating wars to working on actual problems:

“The most urgent threats to the U.S., they say, are increasingly nonmilitary in nature. Among them: cyberattacks; disinformation; China’s economic dominance; climate change; and disease outbreaks such as COVID-19, which ravaged the U.S. economy like no event since the Great Depression.”

The report actually strays from the idea that bases are merely not needed to recognizing them as harmful:

“It may also be counterproductive. Parsi said terrorism recruitment in the Middle East has correlated with U.S. base presence, for example. Meanwhile, American white supremacists, not foreign terrorists, present the gravest terrorism threat to the U.S., according to a report from the Department of Homeland Security issued in October – three months before a violent mob stormed the Capitol.”

We also get an accurate assessment of the bases:

“Today there are up to 800, according to data from the Pentagon and an outside expert, David Vine, an anthropology professor at American University in Washington. About 220,000 U.S. military and civilian personnel serve in more than 150 countries, the Defense Department says.”

“China, by contrast, the world’s second-largest economy and by all accounts the United States’ biggest competitor, has just a single official overseas military base, in Djibouti, on the Horn of Africa. (Camp Lemonnier, the largest U.S. base in Africa, is just miles away.) Britain, France and Russia have up to 60 overseas bases combined, according to Vine. At sea, the U.S. has 11 aircraft carriers. China has two. Russia has one.

“The exact number of American bases is difficult to determine due to secrecy, bureaucracy and mixed definitions. The 800 bases figure is inflated, some argue, by the Pentagon’s treatment of multiple base sites near one another as separate installations. USA TODAY has determined the dates for when more than 350 of these bases opened. It’s not clear how many of the rest are actively used.”

Then we get some nonsense:

“‘They’re counting every little patch, every antenna on the top of a mountain with an 8-foot fence around it,’ said Philip M. Breedlove, a retired four-star general in the U.S. Air Force who also served as NATO’s Supreme Allied Commander for Europe. Breedlove estimated there are a few dozen ‘major’ U.S. overseas bases indispensable to U.S. national security.”

And a decent conclusion:

“Yet there’s no question that the U.S. investment in defense and its international military footprint has been expanding for decades.”

The USA Today article argues that COVID is a priority over wars because it has killed more and cost more — which almost makes you want to cheer for the ridiculously low estimates of war deaths and costs. However, we’re then told:

“But preventing such deaths may not simply be a matter of taking money away from the Pentagon but shifting focus within it. For instance, White House senior COVID-19 adviser Andy Slavitt announced Feb. 5 that more than 1,000 active-duty troops would begin supporting vaccination sites around the U.S.” Token good deeds that could be better done outside of the military is an age-old tactic for maintaining massive spending on weapons, bases, and troops.

The article also notes the serious danger of climate collapse and thankfully doesn’t promote the military as the way to address it, but doesn’t suggest moving the urgently needed money to a Green New Deal either.

To its great credit, the USA Today does point out that China is not engaging in U.S.-scale militarism, and is instead investing in peaceful enterprises and excelling at them — something that former U.S. President Jimmy Carter pointed out to then-U.S. President Donald Trump who responded with increased militarism.

This is included: “Even the chairman of the Joint Chiefs of Staff recently said the U.S. should rethink its large permanent troop levels in dangerous parts of the world, where they could be vulnerable if regional conflicts flare up. The U.S. needs an overseas presence, but it should be ‘episodic,’ not permanent, Milley said in December. ‘Large permanent U.S. bases overseas might be necessary for rotational forces to go into and out of, but permanently positioning U.S. forces I think needs a significant relook for the future,’ Milley said, both because of the high costs and the risk to military families.”

“And while it’s not yet clear how many bases, if any, were shuttered under Trump, since 2016 he opened additional bases in Afghanistan, Estonia, Cyprus, Germany, Hungary, Iceland, Israel, Latvia, Lithuania, Luxembourg, Niger, Norway, Palau, the Philippines, Poland, Romania, Saudi Arabia, Slovakia, Somalia, Syria and Tunisia, according to data from the Pentagon and Vine. The U.S. Space Force, established by Trump in December 2019, already has a squadron of 20 airmen stationed at Qatar’s Al-Udeid Air Base, as well as overseas facilities for missile surveillance in Greenland, the United Kingdom, Ascension Island in the Pacific Ocean and in the Diego Garcia militarized atoll in the Indian Ocean, according to Stars and Stripes magazine, a U.S. military newspaper.”

“In 2019, the U.S.-led coalition backing the Afghan government against Taliban insurgents dropped more bombs and missiles from warplanes and drones than in any other year of the war dating to 2001. Warplanes fired 7,423 weapons in 2019, according to Air Force data. The previous record was set in 2018, when 7,362 weapons were dropped. In 2016, the last year of the Obama administration, that figure was 1,337.”

“New data from researcher Stephanie Savell for the Costs of War project at Brown University’s Watson Institute shows that over the last three years the U.S. has been active in at least 85 countries.”

The map above must have excluded NATO-run “exercises.”

The map below is better on the USA Today site where it updates year by year. 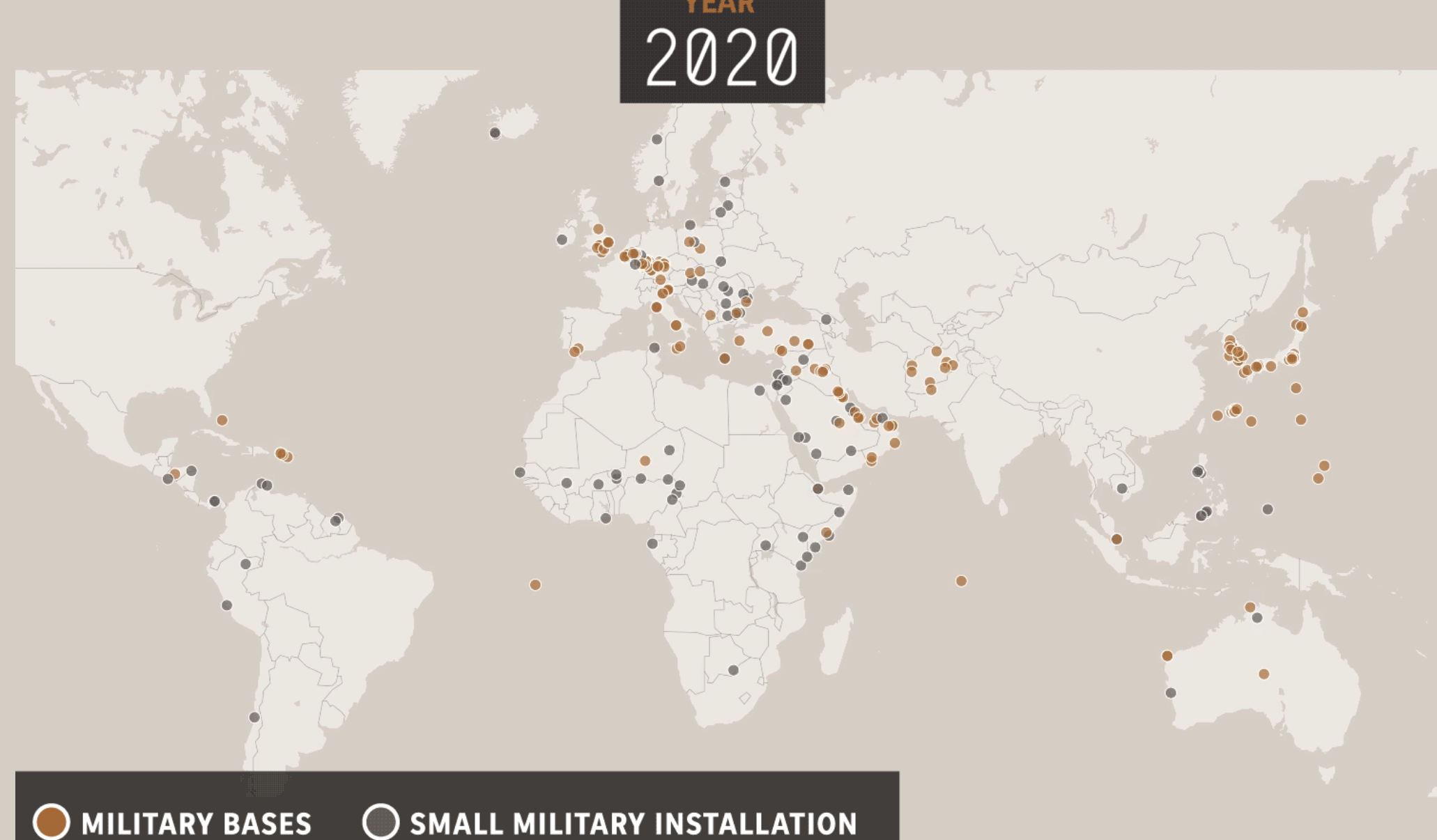 Here’s one with the size of the circles apparently indicating the number of U.S. troops:

A third article from USA Today is called “Biden puts a twist on ‘America First’ even as he moves to unravel Trump’s foreign policy.”

In it, Biden spokespeople suggest that he will move the U.S. away from militarism and toward caring for human and environmental needs.

It would be nice if this fit the evidence thus far of a broken promise on Afghanistan, a halfway and unclear broken promise on Yemen, no movement on shifting military spending to peaceful projects, a broken promise on the Iran agreement, weapons deals to brutal dictatorships including Egypt, continuing warmaking in Syria, Iraq, Iran, refusal to take troops out of Germany, backing for a would-be coup in Venezuela, nomination of numerous warmongers for high office, continued sanctions against the International Criminal Court, continued courting of the Saudi royal dictator, no prosecution of any pre-Biden war crimes, continued exemption for militarism from climate agreements, etc.