The Big Business of Future Wars 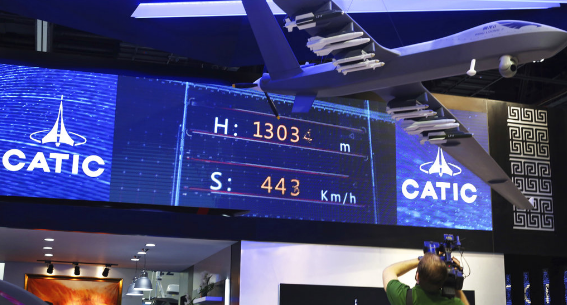 Lawmakers in Congress are preparing to consider big cuts to the emergency $3.5 trillion reconciliation bill designed to fight the climate apocalypse and provide a  safety net to struggling Americans. At the same time, legislators are nonchalantly advancing a defense spending plan that would put America on track to spend more than twice as much on the Pentagon in the same time period.

The dichotomy spotlights how even after the war in Afghanistan concluded, the military-industrial complex is poised for huge growth in the years to come. Indeed, that is precisely the conclusion of both a July report by one of the world’s largest corporate consultancies, as well as recent military contractor earnings calls that took place after the end of the Afghan war.

While the end of the United States’ longest-running war might appear to be a setback for defense industry investors, military contractors and the business interests that track them expect to see major growth in the sector over the next few years, whether or not the country is actively engaged in formal armed conflicts. Because of rising global instability, fallout from the COVID-19 pandemic, the ambitions of the U.S. Space Force, and powerful new military technologies, those who profit from global warfare are expecting turbulent — and profitable — years will follow.

And those profit predictions are buttressed by Congress so far continuing to approve ever-higher Pentagon budgets — and rejecting measures to reduce defense spending.

As corporate Democratic lawmakers threaten to kill the party’s climate and health care spending bill, the party is moving forward with a defense budget that puts the country on track to spend $8 trillion on national defense over the next decade — an amount that’s twice as large as the price of the Democrats’ safety net legislation — and equal to the total amount the country spent on its post-9/11 wars. If that spending is not curtailed, it could mean an enormous jackpot for Wall Street and corporate arms dealers.

Dr. Anelle Sheline, a research fellow in the Middle East program at the Quincy Institute for Responsible Statecraft, is frustrated by the defense industry’s mercenary approach to future warfare and global destabilization, and she believes such corporate avarice could very well fuel additional hostilities.

“The expansion of private sector investment in the military-industrial complex will have the effect of further privatizing violence, and making the perpetrators of violence less accountable to democratic oversight,” she says. “This will exacerbate the extent to which the U.S. military acts, and is perceived as a mercenary force.

“Get Ahead Of The Game”

KPMG, one of the “Big Four” accounting firms that regularly engage with Fortune 500 companies, released a July report titled, “The Private Equity Opportunity in Aerospace and Defense.”

The firm, which was sued for its role in the subprime mortgage crisis, predicts that “now is perhaps one of the best times for private equity to leverage the strengths and engage with” the military-industrial complex.

The report opens by noting that the COVID-19 pandemic has increased global instability — and global instability is good for the defense industry. The report notes that “the world settlement is currently at its most fragile since the Cold War, with the three main players — the U.S., China and Russia — continuing to spend more on their defense capabilities and so inducing a trickle-down effect onto other nations’ defense expenditure.”

The report goes on to predict that by 2032, the combined defense spending of Russia and China will risk outpacing the U.S. defense budget. According to the analysis, this potential outcome “will be so politically toxic that it is our projection that U.S. spending will overcompensate against even the risk of that happening.”

KPMG analysts also played up the financial returns of technological innovations in warfare. They noted the “growing consensus that the militaries of the near future will be more remotely driven,” explaining that comparably inexpensive unmanned drones are capable of decimating expensive tanks. The authors also point out that the global economy’s increasing reliance on intellectual property over physical assets was a good reason to bet on cyber warfare as an investment: “It is currently a booming area and one where defense budgets are rising very quickly as countries continue an arms race with near-peer adversaries in this capability.”

These developments, note the authors, present an opportunity for manufacturers and investors who can “get ahead of the game,” adapting to the new parameters of global warfare.

“They’re like, ‘No, no, it’s okay now, you can invest in these lethal systems because it’s removed; it’s remote killing; it’s drone systems; it’s not necessarily a gun, it’s a more removed form of violence,” she says.

The KPMG report goes on to assure investors that “this promising investment landscape remains even if budgets do come under some short-term pressure,” because “reduced budgets actually bolster the case for private sector investment.” If they are unable to afford next-generation technology, the report explains, governments will need to upgrade existing equipment and capabilities, increasing demand for private supply chain actors.

Sheline sees the report in the context of a growing relationship between Silicon Valley technology companies and the military, which she finds concerning. For many years, she says, private equity shied away from investing in the military-industrial complex due to the uncertain timeline on returns. The KPMG report, she explains, appears aimed at “those who haven’t yet gotten into the game” and invested in the sector.

Give a Gift Subscription

“We Don’t Expect To See A Significant Change”

In August, several military contractors echoed KPMG’s predictions in earnings calls, assuring investors that their profits ultimately wouldn’t be impacted by the recent end of the Afghan war.

Military contractor PAE Incorporated, for example, told its investors in an August 7 earnings call that “we don’t expect to see a significant change” due to the end of the Afghanistan conflict because the Biden administration was planning to maintain an embassy in Kabul. That means the company’s services, which have included training local security forces in the past, will likely still be needed.

“We’re monitoring the situation in Afghanistan, including the security concerns that have been raised, but we currently don’t see any impacts to our revenue or profitability on that program,” a representative of the company said in the call. Last year, a private equity firm sold PAE to a special purpose acquisition company sponsored by another private equity firm.

CACI International, which has been providing intelligence and analytics support to the military in Afghanistan, told investors in its August 12 earnings call that while the end of the war was hurting its profits, “We’re seeing positive growth in technology and expect it to continue to outpace expertise growth, collectively offsetting the impact of the Afghanistan drawdown.”

CACI, which is facing a federal lawsuit for allegedly overseeing the prisoner torture at the Abu Ghraib prison in Iraq, is still concerned about the end of the U.S. war. The company has been funding a pro-war think tank to push back against the withdrawal.

Sheline is worried that the KPMG analysts’ and defense contractors’ predictions of lucrative conflicts to come will prove accurate.

While Biden might have ended America’s longest war and announced weeks after taking office that the country would no longer support Saudi Arabia’s “offensive” operations in Yemen, Sheline says these moves don’t necessarily represent a full-scale recalibration of American foreign policy. She says the U.S. has continued supporting Saudi Arabia’s war efforts, and argues the Afghanistan withdrawal was part of a broader strategy to engage in a “cold war with China.”

Nor is Sheline confident that the U.S. lawmakers will shift course on global warfare. She points to the 2022 National Defense Authorization Act (NDAA), which, at a whopping $768 billion, was the most expensive defense budget in history. House Democrats voted down two amendments that would have mildly slashed the budget — and both received fewer votes than similar attempts last year.

Last month, the House took a step towards easing the military drumbeat by passing an amendment to the NDAA authored by Rep. Ro Khanna, D-Calif., that would withdraw Congressional authorization for U.S. involvement in Saudi Arabia’s war in Yemen. But on the same day, the House passed another amendment from Rep. Gregory Meeks, D – N.Y., containing softer language that Sheline says “recycles the existing language that Biden used back in February about Yemen.”

The Senate is now slated to consider both amendments as it works to pass the NDAA. “They’re probably going to strip Khanna’s amendment and go with Meeks’ amendment and keep everything the way it is,” says Sheline.