Peace Activist Kathy Kelly on Reparations for Afghanistan & What the U.S. Owes After Decades of War 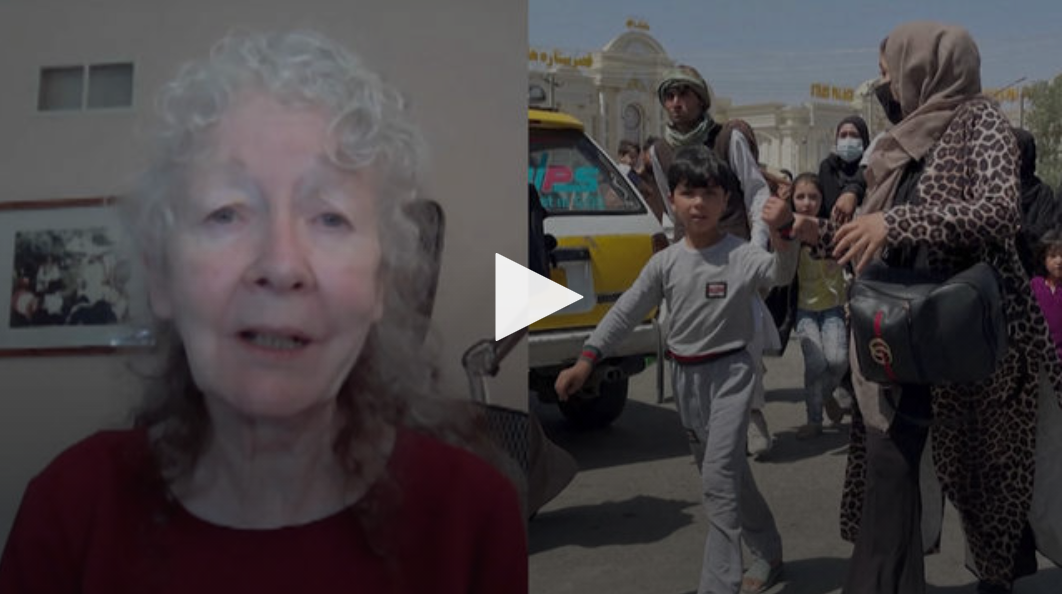 As the United States ends its military presence in Afghanistan after 20 years of occupation and war, the Costs of War Project estimates it spent over $2.2 trillion in Afghanistan and Pakistan, and by one count, over 170,000 people died during the fighting over the last two decades. Kathy Kelly, longtime peace activist who has traveled to Afghanistan dozens of times and coordinates the Ban Killer Drones campaign, says it will be important to keep international focus on the people of Afghanistan. “Everybody in the United States and in every country that has invaded and occupied Afghanistan ought to make reparations,” Kelly says. “Not only financial reparations for the terrible destruction caused, but also to address … the systems of warfare that ought to be set aside and dismantled.”

U.S. military and diplomatic forces withdrew from Afghanistan just before midnight local time in Kabul Monday night. While the move is being described as the end of the longest war in U.S. history, some warn the war may not be truly over. On Sunday, Secretary of State Tony Blinken appeared on Meet the Press and discussed U.S. capabilities to keep attacking Afghanistan after troops withdraw.

SECRETARY OF STATE ANTONY BLINKEN: We have the capacity around the world, including in Afghanistan, to take — to find and to take strikes against terrorists who want to do us harm. And as you know, in country after country, including places like Yemen, like Somalia, large parts of Syria, Libya, places where we don’t have boots on the ground on any kind of ongoing basis, we have the capacity to go after people who are trying to do us harm. We’ll retain that capacity in Afghanistan.

AMY GOODMAN: Back in April, The New York Times reported the United States is expected to keep relying on a, quote, “shadowy combination of clandestine Special Operations forces, Pentagon contractors and covert intelligence operatives” inside Afghanistan. It’s unclear how these plans have changed following the Taliban takeover.

For more, we’re joined in Chicago by the longtime peace activist Kathy Kelly. She’s been nominated for the Nobel Peace Prize over and over again. She’s traveled to Afghanistan dozens of times.

Kathy, welcome back to Democracy Now! Can you start off by responding to what is being hailed in the U.S. press as the longest war in U.S. history is over?

KATHY KELLY: Well, Ann Jones once wrote a book entitled War Is Not Over When It’s Over. Certainly, for people in Afghanistan, who have been afflicted by this war, by conditions of terrible drought for two years, a third wave of COVID, terrible economic realities, they’re still suffering a great deal.

And the drone strikes, I think, are an indication that — these most recent drone strikes, that the United States has not set aside its intent to keep on using what they call force and precision, but what Daniel Hale, who is now in prison, has shown 90% of the time did not hit the intended victims. And this will cause more desires for revenge and retaliation and bloodshed.

JUAN GONZÁLEZ: And, Kathy, I wanted to ask you, in terms of this — do you feel that the American people will draw the best lessons from this terrible situation in Afghanistan, this clear defeat for the United States and its occupation? After we’ve seen now for 70 years U.S. military force exercised in these occupations, from Korea to Vietnam to Libya to — the Balkans is the only thing that the U.S. can sort of claim as a victory. There have been disaster after disaster, now Afghanistan. What lesson would you hope our population would learn from these terrible occupations?

KATHY KELLY: Well, Juan, you know, I think the words of Abraham Heschel apply: Some are to blame; all are accountable. I think everybody in the United States and in every country that has invaded and occupied Afghanistan ought to make reparations and really earnestly seek that, not only financial reparations for the terrible destruction caused, but also to address the systems that you’ve just mentioned played out in country after country, the systems of warfare that ought to be set aside and dismantled. This is the lesson that I think U.S. people need to learn. But, you know, there was more coverage in the last two weeks by mainstream media of Afghanistan than there had been in the past 20 years, and so people are underserved by the media in terms of understanding the consequences of our wars.

AMY GOODMAN: You are not in the business, Kathy, of complimenting U.S. presidents when it comes to war. And this was one U.S. president after another, I think, for at least, overall. Do you think Biden had political courage in pulling out, to the extent that they have, publicly, the last U.S. troop, the photograph sent out by the Pentagon, by the general getting on the last transport carrier and leaving?

KATHY KELLY: I think had President Biden said that he was also going to go up against the United States Air Force request for $10 billion to enable over-the-horizon attacks, that would have been the kind of political courage that we need to see. We need a president who will stand up to the military contracting companies that make billions by marketing their weapons, and say, “We’re done with all of it.” That’s the kind of political courage we need.

AMY GOODMAN: And the over-horizon attacks, for people who are not familiar with this term, what it means, how the U.S. is set up to attack Afghanistan now from outside?

KATHY KELLY: Well, the $10 billion that the U.S. Air Force requested will go to maintaining both drone surveillance and attack drone capacity and manned aircraft capacity in Kuwait, in the United Arab Emirates, in Qatar and in an aircraft and the middle of the ocean. And so, this will always make it possible for the United States to continue to attack, often people who aren’t the intended victims, and also to say to every other country in the region, “We are still here.”

AMY GOODMAN: We thank you, Kathy, so much for being with us. Ten seconds on reparations. What would it look like, when you say the U.S. owes reparations to the people of Afghanistan?

KATHY KELLY: A massive amount of money put in by the U.S. and all the NATO countries into perhaps an escrow account, that would not be under the guidance or the distribution of the United States. The United States has already shown that it can’t do that without corruption and failure. But I think we would have to look to the U.N. and groups that have a reputation for being able to truly assist people in Afghanistan, and then reparations through dismantling the war system.

AMY GOODMAN: Kathy Kelly, longtime peace activist and author, one of the founding members of Voices in the Wilderness, later Voices for Creative Nonviolence, and the co-coordinator of the Ban Killer Drones campaign and a member of the World Beyond War. She has traveled to Afghanistan nearly 30 times.

Next up, New Orleans in the dark after Hurricane Ida. Stay with us.

AMY GOODMAN: “Song for George” by Mat Callahan and Yvonne Moore. Today is the last day of Black August to remember Black freedom fighters. And this month marks 50 years since the assassination of activist and prisoner George Jackson. The Freedom Archives has published a list of the 99 books George Jackson had in his cell.