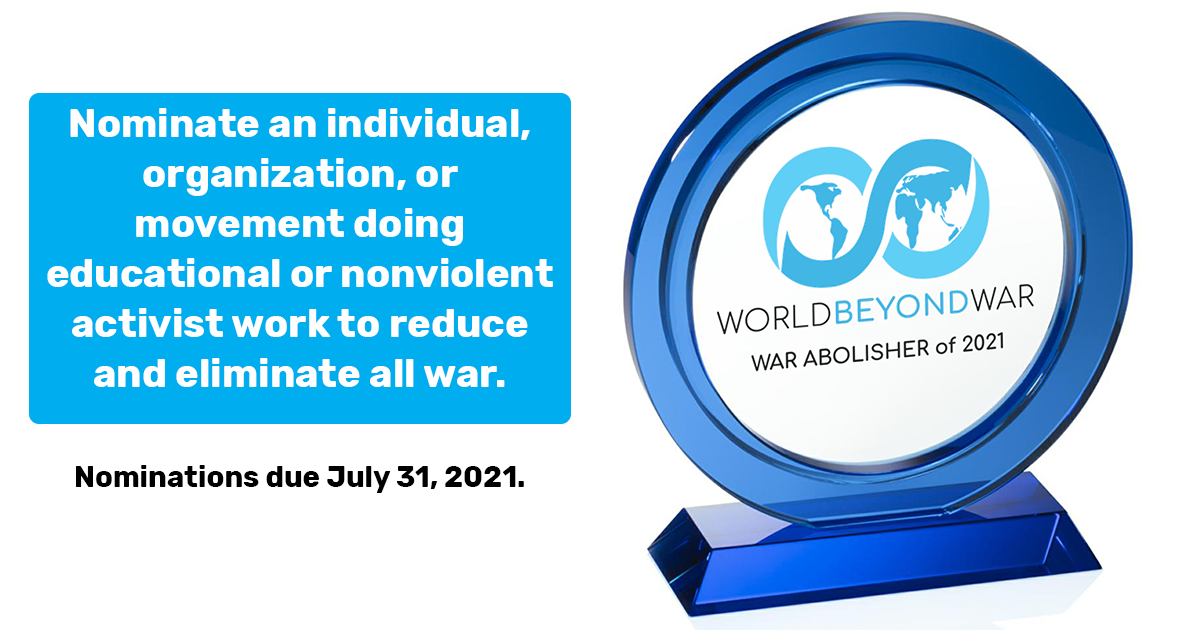 World BEYOND War wants to honor those working to abolish the institution of war itself. With the Nobel Peace Prize and other nominally peace-focused institutions so frequently honoring other good causes or, in fact, wagers of war, we intend this award to go to educators or activists intentionally and effectively advancing the cause of war abolition, accomplishing reductions in war-making, war preparations, or war culture.

When, and how often will the award be given? Annually, on or about the International Day of Peace, September 21st.

Who can be nominated? Any individual or organization or movement doing educational and/or nonviolent activist work toward the ending of all war. (No World BEYOND War staff or board members or advisory board members are eligible.)

Who can nominate someone? Any individual or organization who/which has signed the WBW Declaration of Peace.

When will the nomination period be? 1 June through 31 July.

Who will select the winner? A panel of members from the WBW board of directors and the advisory board.

What are the criteria for choosing? The body of work for which the person or organization or movement is nominated should directly support one or more of the three segments of the WBW strategy for reducing and eliminating war as outlined in A Global Security System, An Alternative to War: Demilitarizing Security, Managing Conflict Without Violence, and Building a Culture of Peace.

Lifetime Award: Some years, in addition to the annual award, a lifetime award may be given to an individual in honor of many years of work.

Youth Award: Some years, a youth award may honor a young person, or organization or movement of young people.