Japan for a World BEYOND War 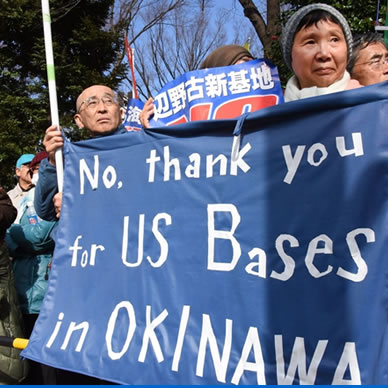 Japan for a World BEYOND War is organized by Joseph Essertier. Joseph is an American living in Japan who began actively opposing war in 1998 during the Kosovo War. Subsequently, he came out against Washington’s wars in Afghanistan and Iraq, and in 2016 the construction in Henoko and Takae that anti-base Okinawans have tenaciously resisted and successfully slowed down. He has recently written and spoken about Japanese activists who educate their fellow citizens about history and resist denialism surrounding the Asia-Pacific War. His research has mostly focused on language reform movements between the 1880s and 1930s in Japan that facilitated democracy, inclusivity, cultural diversity in Japan and abroad, and writing by women. He is presently an associate professor at the Nagoya Institute of Technology.

As of this September 2020, Mr. KAMBE Ikuo will be filling in as the Coordinator of Japan for a World BEYOND War for Joseph Essertier, for about 7 months (until March 2021). Mr. Kambe was born in 1954. While working for a company, he became a member of an amateur folk group. And after retirement in 2014, he went and saw for himself for the first time the protests in front of the gate to Camp Schwab in Henoko. After that, he went to Okinawa 6 to 7 times per year and participated in sit-ins protesting the new base construction in Henoko and Takae.

An accomplished antiwar singer-songwriter, he began organizing concerts entitled “Concert in Nagoya Opposing the New Base Construction in Henoko” (Henoko shinkichi hantai konsaato in Nagoya) in June 2015 in Nagoya. Since then, a concert has been held four times per year. Donations are collected at the concerts and sent to citizen activist groups in Henoko. 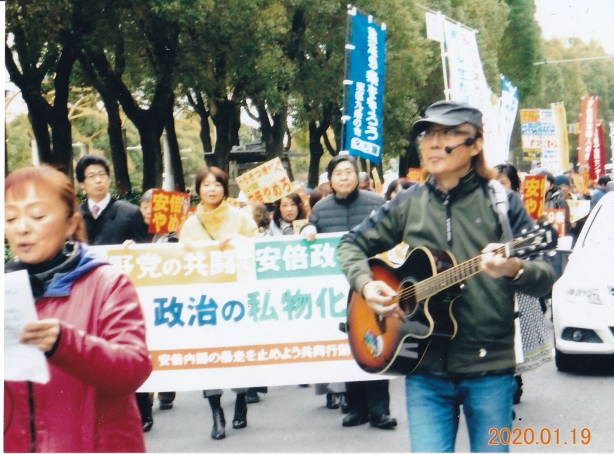 In the process of promoting a concert, he became acquainted with many civic groups and activists and began to sing at meetings and demonstrations. Mr. Kambe began participating in street protests against the construction of US military bases in Takae and Henoko, when they first began, in July 2016. Street protests are held each week on Saturdays from 18:00 to 19:00. There have been well over 200 protests so far, and they have continued unabated up until the present. It was at one of these early street protests where Joseph Essertier and Mr. Kambe first met.

In July 2017, Mr. Kambe filed a lawsuit against the dispatch of the Aichi Prefectural Police Corps, who were forcing the construction of Osprey helipads in Takae. He did work as a member of the plaintiff secretariat. After the plaintiffs lost in March 2020, they submitted an appeal to a higher court.

In August 2019, art works referencing the former “comfort women” atrocity of the Empire of Japan and photos of the Showa Emperor (i.e., Hirohito) were displayed at an exhibit entitled “Lack-of-Freedom-of-Expression Exhibit: Part II” (Hyōgen no fujiyūten: sono go https://www.japantimes.co.jp/news/2019/08/20/national/social-issues/art-exhibits-comfort-women-freedom-of-expression/). This was part of a major arts festival in Japan called the Aichi Triennale. Some people protested this art exhibit and even harassed the organizers of the art exhibit. After three days the Exhibit was shut down. In response to the shutdown, there were daily street protests demanding its reinstatement. Mr. Kambe regularly participated in those protests. Through the efforts of our citizens movement in Nagoya, the Exhibit organizers, lawyers, and an international uproar, the Exhibit was reopened during the last week just before the end of the Aichi Triennale exhibit period.

After that, he participated in the Aichi Society to Continue the Lack-of-Freedom-of-Expression Exhibit: Part II (Hyōgen no fujiyūten: sono go wo tsunageru Aichi no kai). He has engaged in activities keeping alive awareness of the injustices surrounding this issue. For example, an ultranationalist “recall” campaign has been underway for months, in which people are demanding that Governor ŌMURA Hideaki be fired for doing his job properly, and standing up for freedom of expression and against the tide of atrocity denialism in Japan.

Nagoya is at the center of a struggle over the basic facts of history that were long ago thoroughly documented by established historians. Mis-informed and even deceptive people have questioned the history of the colonialism of the Empire of Japan with its militarist violence, even when the wounds resulting from that violence are still felt throughout East Asia in all of Japan’s former colonies. One can see from films such as Mike Dezaki’s “Shusenjo: The Main Battlefield of the Comfort Women Issue” that this historical revisionism is playing a major role in building the case for the remilitarization of Japan. Mr. Kambe is one of the few brave citizens taking up the thankless job of protecting the facts of history.

Click here for more information in Japanese about the concerts and images from posters and flyers.