How One Town Kicked Out Raytheon 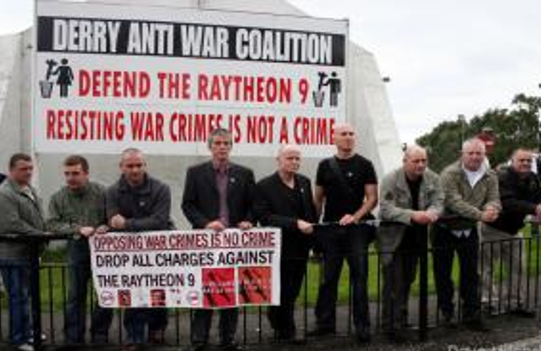 A webinar was held on June 16th to review a success story.

Swords to Ploughshares, a new Irish network against the Arms Trade. With Spirit AeroSystems in Belfast grant aided by the UK government to manufacture military drones and their continued support for arms production at Thales, it was decided that it was a good time to get together to celebrate the removal of Raytheon from Derry to inspire resistance to current development in Northern Ireland and the Republic.

The webinar was introduced and moderated by Joe Murray of AFRI. He spoke about how he saw a picture of John Hume and David Trimble welcoming Raytheon to Derry in 1999 as the ‘first fruits of the peace process’. The shocking irony of this had inspired him to hold a public meeting in Derry along with Children in Cross fire and this included students from East Timor at a time when weapons from the UK were being sold to the Indonesian military for use in East Timor. Out of this meeting FEIC – Foyle Ethical Investment Campaign was founded who along with Derry Ant-War Coalition (DAWC) and others built the campaign against Raytheon.

Jim Keys was one of the people behind the FEIC campaign and he gave an overview of how this cross community group with no party affiliation operated as a loose alliance who took on Raytheon. Following the AFRI meeting they had worked on an East Timor mural and set up a citizens jury to consider the appropriateness of Raytheon coming the Derry. The jury returned a verdict of ‘not welcome’ and a monthly vigil was established outside the Raytheon offices. A symbolic grave was dug here to mark the innocent victims of the weapons industry and signs around the city, the appearance of the theatrical ‘stealth monster’ and various actions took place which included the use of the Free Derry wall.

Politicians didn’t engage though in 2003 the City Council did oppose the war in Iraq.  Raytheon did not engage or make a response to any of this, though they claimed that the Derry operation was essentially a civil one.  Jim pointed out that Derry was a place where people understood what it was like to be ‘collateral damage’ and this was important in the development of the campaign. With a vigil in the Guildhall Sq, a shroud covering the Free Derry Wall and the Black Shamrock symbol of Irish neutrality and opposition to war,  the campaign broadened across the city and in Feb 2008 a plaque was placed on the city walls dedicated to lives lost as a result of weapons made in Derry. Though the campaign would continue with regular vigils it would take a more public action to have greater effect.

Eamonn McCann, who had been a key leader in the civil rights movement, was one of the six of the Raytheon 9 who stood trial for occupying the Raytheon offices in August 2006. He talked about what had led to the occupation and how they were vindicated in court. A meeting of DAWC had taken place in Sandino’s Bar on 2nd  August to hear former U.S. army interrogator Joshua Casteel. Hearing about the recent Israeli massacre in Qana, Lebanon on 30th July, the Raytheon connection was made and it was decided to occupy the plant.

It was felt that everything had been tried to engage the politicians and media and that vigils would not be enough to close down Raytheon. There had been no support from the mainstream who said they were against weapons manufacture but did nothing against it.  The occupation of 9th August (the anniversary of the Nagasaki bombing) was a last resort and McCann talked about the ‘semi-spontaneity’ of the event. They didn’t expect to get in but had managed to rush the door as an employee went in and once inside proceeded to destroy the main frame computer and throw other computers and materials out the window. The eventual arrival of riot police in full armour saw nine men seated quietly playing cards and they were arrested and subsequently put on trial.

Eamonn Mc Cann talked about the case that was presented at that trial in 2008 and how the six  men were acquitted. The case was based on the fact that the law would not see their action as defensible, so they had to show that they were actually trying to save lives, stop or delay a war crime, not just protest against it. They had to show that they had previously done everything that was possible and only after that failed did they commit to action in the reasonable belief they could stop war. The involvement of the Derry Raytheon plant in the development of rocket guidance systems and interconnectedness of the computer system with the Scotland plant meant they had legitimately  targeted this to put the system out of action to help prevent a greater evil.  In effect they  put Raytheon on trial and their defence was McCann claimed  ‘unassailable’. This gave it a certain international resonance and he felt that the Derry action had a real effect on the morale of victims in Qana, who they later went to visit.

He said it was the best thing he ever did and that it is never futile to stand up against war, even though you think it won’t achieve anything. The accumulation of actions, protests and messaging had been important so it was not a one off event. The trial victory was the pay-off for many previous events. It was important that the occupation was not over-planned and had some element of spontaneity. Neither was it just about the ‘burly men’ who were arrested, as women had been hugely involved. He said it was essential ‘to do everything patiently, but not to be afraid to be daring when the moment comes’. You need to wait and be alert for that moment.

Goretti Horgan was one of the nine women who entered the  Raytheon offices in a second third occupation in 2009. She spoke about being motivated by the Shannon 5 who had earlier attacked a US military aircraft in Shannon Airport and been through a long trial at which they were acquitted. Goretti had been present at the first second occupation though at the time left before the arrival of the police to avoid being arrested. She emphasised that women had always been involved in the protests and actions and that Israeli bombings of Gaza had also been an influence on the women’s occupation. The precision guidance systems used in the Israeli attack were developed by Raytheon.

The women’s occupation may not have done as much damage as the men’s but it had stopped the plant functioning and kept the opposition to Raytheon going which was important. This time the main frame computer had been encased in steel so water couldn’t damage it.  She said it was an educational process where they learnt a lot about the arrogance and lies of the arms industry. The sheer horror of the weapons they manufactured was shocking and it was hard to conceive how people thought them up in the first place. ‘We have to do whatever we can to end this evil trade for once and for all’ she said. The women were also put under trial and acquitted.

There was some discussion at the end of the session and some conclusions were drawn. Protests had never stopped after the trials and Raytheon eventually announced their departure in January 2010. They denied this had anything to do with the protests but under Freedom of Information it was revealed that they had said they couldn’t stay because the legal system could not guarantee their safety. It was mentioned that global solidarity is important and the protests at Raytheon in Tucson, U.S., had taken inspiration from what happened in Derry.

It is essential to know your rights and work together to get rid of the arms trade. We need to draw on victories like the one in Derry to give us momentum, just as the Dunnes Stores strikes against South African apartheid and solidarity with East Timor had had an effect. A new phase of protest would now be required to oppose recent arms contracts in Belfast and extractive industries. Derry activists were ready to be involved again and this time would make connections with climate change and what arms trade does to the environment.