Demilitarizing the Mountains of Montenegro 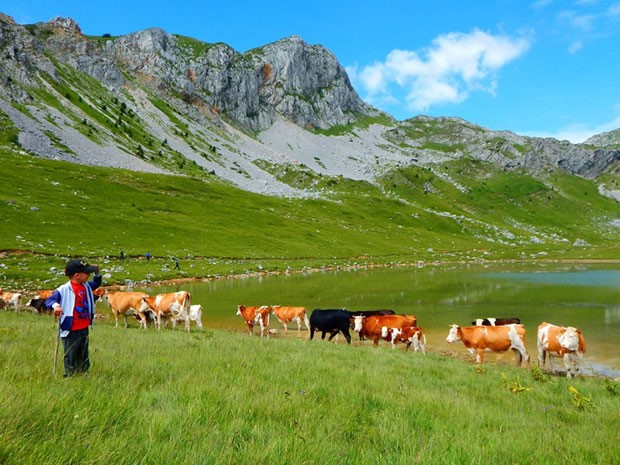 High in the grassland mountains of Montenegro, within a UNESCO Biosphere Reserve and in between two UNESCO World Heritage sites, lies a stunning land with exquisite biodiversity and an uncommon symbiosis between small groups of pastoral herders and the green, flowering earth they cultivate. These groups have their own rules for gently managing the area so as to respect the growing cycle of the plants, to not just preserve the area as a food source but to help nourish it, to understand it as alive and delicate. Everything is decided communally, peacefully among these people. There are no roads, no electricity, nothing we could call “development.” The hills are an emerald green in spring and summer and a pure white in winter. Only about 250 families live on these thousand square miles of continuous pasture. They have done so for centuries. If I had to place Shangri-La on a map, I would do it here, in these bucolic, harmonious grasslands, in this place called Sinjajevina.

You cannot find it easily on a map. There is nothing of note to draw the eye. Emptiness, mostly.

A vast, high plateau in a small country that was formerly part of Yugoslavia. But that vast emptiness and its strategic location have drawn the attention of an unwanted guest. NATO. The largest and most powerful military alliance the world has ever known would like to build a military base in these quiet, lush lands.

Montenegro joined NATO in 2017 and soon after began scanning the country for a military training ground. Without consulting their citizens, or specifically the pastoralists who live in Sinjajevina, without any environmental impact statements or debate in their parliament, or consultation with UNESCO, Montenegro went forward with plans to have a large, active military drill in Sinjajevina with live munitions, followed by plans to construct a base. On September 27, 2019, it was made official when troops from the United States, Austria, Slovenia, Italy, and North Macedonia put boots on the ground.  On that same day, they detonated a half ton of explosives on the peaceful grasslands.

Though not officially called a NATO base, to Montenegrins it was clear this was a NATO operation. They were immediately concerned. The environmental, social, and economic damage to the area would be enormous. Military bases are corrosive, deadly affairs to indigenous lands and people. The hazardous materials, the unexploded ordinance, the endless burning of fuel, the building of roads and barracks and bombs quickly turn an oasis into a sprawling and lethal hazmat site.

And so the pastoral herders in the highlands decided to resist. They organized with a small group of local activists and members of the national Green Party. Soon, word spread. Groups outside the country got involved. The ICCA (Indigenous Peoples’ and Community Conserved Areas and Territories Consortium), the International Land Coalition, and the Common Lands Network. Working with Montenegro‘s national Green Party, these groups drew the attention of the European Parliament. In the summer of 2020, Land Rights Now got into the act. Experts in campaigning and with large resources, they set up an international campaign drawing attention and funds to the plight of the people and land of Sinjajevina.

National elections were to take place in Montenegro in August 2020. The timing was good. Citizens were united against the long-standing government for various reasons. The Sinjajevina movement united with the Serbian Orthodox Church. Protestors took to the streets. Momentum was in their favor. On August 30, the elections were held and the ruling party lost, but the new government would not take office for months. The military planned to go ahead with the massive drill. The opposition decided they had to stop it, not with bullets or bombs, but with their bodies.

One hundred and fifty people formed a human chain in the grasslands and used their bodies as shields against the live ammunition of the planned military exercise. For months they stood in the way of the military, preventing them from firing and executing their drill. Whenever the military moved, so did they. When Covid hit and national restrictions on gatherings were implemented, they took turns in 4-person groups set in strategic spots to stop the guns from firing. When the high mountains turned cold in October, they bundled up and held their ground.

In December 2020, the new government was finally installed. The new defense minister was connected with the European Green Party and immediately called for a temporary halt of the military training exercises on Sinjajevina. The new minister also considered the idea of canceling any military base in the area.

While this was good news for the Save Sinjajevina movement, they believe the government must repeal the previous decree allowing Sinjajevina to be used as a military training ground and a new law passed protecting the land and its traditional uses forever. They need pressure to make this happen. International support. The work needs to be finished. Finalized. Codified in law. They are seeking help from the outside to win not just a temporary reprieve but a permanent guarantee. A crowdfunding site has been set up. Petitions are available to be signed. Funding is needed. Calling a place Shangri-La is too often the kiss of death. But maybe— with added and sustained international pressure— Sanjajevina will elude that fate.