World BEYOND War raises funds to — independently and in coalition with others — put up pro-peace and anti-war billboards all over the world.

Where and When We've Put Up Billboards
Popular Designs

We design new billboards all the time. Here are some popular designs.

Explanation of the Statistic in Our 3% Billboards 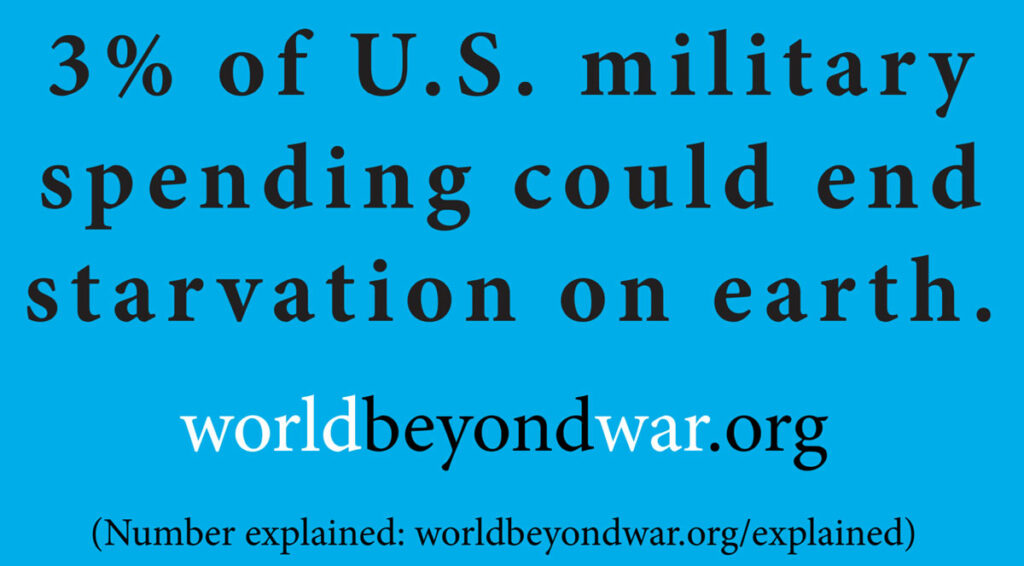 In 2008, the United Nations said that $30 billion per year could end hunger on earth, as reported in the New York Times, Los Angeles Times, and many other outlets. The Food and Agriculture Organization of the United Nations tells us that number is still up to date.

Global military spending is $1.8 trillion, as calculated by the Stockholm International Peace Research Institute, which only includes $649 billion of U.S. military spending as of 2018, making the actual global total well over $2 trillion. One-and-a-half percent of 2 trillion is 30 billion. Every nation on earth that has a military can be asked to move its share to alleviate hunger.

No, it does not. In a 2015 report, the UN FAO estimated that $265 billion per year for 15 years would be necessary to permanently eliminate extreme poverty — a much broader project than just preventing starvation one year at a time. The FAO’s spokesperson explained in an email to World BEYOND War: “It would be incorrect to compare the two figures [$30 billion a year to end hunger vs. $265 billion over 15 years] as the 265 billion has been calculated taking into consideration a number of initiatives including social protection cash transfers aimed at extracting people from extreme poverty and not just hunger.”

The U.S. government already spends $42 billion per year on aid. Why should it spend another $30 billion?

As a percentage of gross national income or per capita, the U.S. gives much less aid than other countries do. Plus, 40 percent of current U.S. “aid” is not actually aid in any ordinary sense; it’s deadly weapons (or money with which to buy deadly weapons from U.S. companies). In addition, U.S. aid is not targeted based purely on need but based largely on military interests. The biggest recipients are Afghanistan, Israel, Egypt, and Iraq, places the United States deems most in need of weapons, not places an independent institution deems most in need of food or other aid.

Individuals in the U.S. already give private charitable donations at high rates. Why do we need the U.S. government to provide aid?

Because children are starving to death in a world awash in wealth. There is no evidence that private charity decreases when public charity increases, but there is lots of evidence that private charity is not all it’s cracked up to be. Most U.S. charity goes to religious and educational institutions within the United States, and only a third goes to the poor. Only a small fraction goes abroad, only 5% to assist the poor abroad, only a fraction of that toward ending starvation, and much of that lost to overhead. The tax deduction for charitable giving in the United States appears to enrich the rich. Some choose to count “remittances,” that is money sent home by migrants living and working in the United States, or the investment of any U.S. money abroad for any purpose, as foreign aid. But there is simply no reason that private charity, no matter what you believe it to consist of, could not remain the same or increase if U.S. public aid were brought closer to the level of international norms.

World Beyond War billboards are funded entirely by contributions made here by supporters of ending war.

We can put up more, and you can tell us where you want to see which ones, if you fund them.

Read about the 3 Percent Plan to End Starvation.

Guide to Getting the Most Out of Billboards

Here is our guide to using billboards to generate media, membership, and activism. Here’s a related power point / PDF.

World BEYOND War billboards are funded by contributions made here.

Images of Some of the Billboards We've Put Up

Articles About Some of the Billboards We've Put Up The Iron Cage of War: The Present War System Described