Bicycling for Peace and Environmental Justice: Halfway Across the Country Now 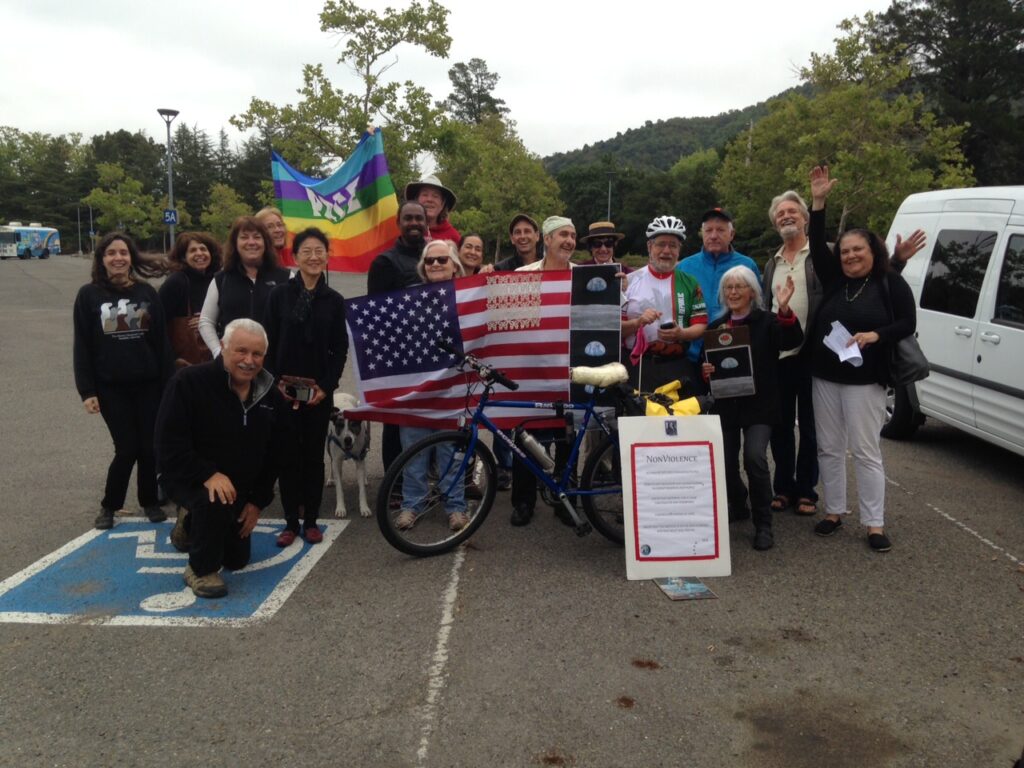 I left from Marin County, just north of San Francisco, to LA on Memorial day, and then on June 15 headed east toward Washington D.C. I have ridden over 1,600 miles and climbed more than 40,000 feet of mountains. I will be traveling Oklahoma, Kansas, and Missouri the next few weeks and hope to arrive in DC mid to late September.

I view this as a necessary pilgrimage for me. I want to raise awareness that climate change, which threatens our civilization, is only intensified by war, and that there is no solution to climate change that does not include peace.

“Continued emission of greenhouse gases will cause further warming and long-lasting changes in all components of the climate system, increasing the likelihood of severe, pervasive and irreversible impacts for people and ecosystems.” — Intergovernmental Panel on Climate Change, Fifth Assessment Report 2013

This is the 70th anniversary of the bombing of Hiroshima and Nagasaki, a demarcation notifying us that industrial warfare can end civilization. Clearly we the people of this earth are at a critical juncture, whether to work in peaceful cooperation to solve the consequences of climate change or whether out of fear we wreak havoc through war. Polls show we have collectively lost trust that our good intentions are the leading motives of our leaders’ actions. My hope lies in the faith that we can change this and that in other countries there are people such as us.

But we are accustomed to viewing issues as independent of each other, war and the environment as not connected. And yet our Department of “Defense” has been telling us for many years now that climate change is a serious national security threat. Indeed it is a global security threat that is destabilizing our world. We must understand that military force forgoes the international cooperation needed for solving our climate problem. War reverses all of our progress on improving environmental standards. It is extremely carbon intensive. Our task is to stand firm against the evangelists of war and to reject their fear mongering. The rejection of militarism is necessary — it is the only course towards climate solutions.

The effects of climate change are not limited to melting Arctic ice sheets.

Climate change drought is causing civil strife and provoking war. A multi-year drought in Syria caused the migration of the rural population into the cities and threatened the stability of their imperfect government that has turned into ‘a major civil war with international involvement.’ Scientific studies report that in Sub-Saharan Africa there is a 30-year correlation of climate changes ‘with an increase in the likelihood of civil war.’ Additionally food shortages caused by climate change have been found to be a contributing factor in the Arab Spring uprisings. (Scientific American, March 2, 2015)

The world population is on course to increase 30% in the next few decades. Many countries are now incapable of producing enough food for their current population. Overdrawn aquifers and drought have depleted once abundant land. Additionally sea level rise will diminish many productive river deltas from food production.

Americans have a special role to play in world affairs.

The US accounts for nearly half of all military spending worldwide. Our leaders are correct in telling us that we are the strongest military power on earth. What they leave out is that this great force is limited to destruction and chaos as evidenced by its recent use in conflicts from Afghanistan to Iraq from Libya to Syria. We have given the whole of the 20th century to perpetual war. How much time can we give to peaceful solutions, to negotiated solutions?

It takes significant fear-mongering to turn people towards war. The images of the World Trade Towers falling and the beheadings of innocents are such propaganda. These are real events, horrifying, and they terrorize us. What we fail to see is that our interventionist policies and militaristic actions are part of the cause and are not the solution. It is our responsibility, if we are serious about reversing climate change, that we face our fears and question closely what alternatives there are for this violence.

What outcomes are forgone by following the path of war?

What are possible unintended consequences?

What can be gained by peaceful initiatives?

International cooperation, the hallmark of peace, is necessarily part of the solution. We cannot wage war or threaten to do so and at the same time expect to receive the assistance we need to reverse the level of atmospheric greenhouse gases.

We can chose leaders that have a track record for constructive action.

We have to demand of our leaders that they abandon acting like 19th-century imperialists, militarily dominating others for their resources. It doesn’t add to our security and in fact it puts us in greater jeopardy. And it is completely unnecessary in a global economy. We need to end war as it is the antithesis of the peaceful cooperation we need. Climate change is the real threat to our security. Environmentalists need to assert that there exists no military path to climate security.

I will be posting at: Bicyclingforpeace.blogspot.com