The U.S. government has reached the bottom of the barrel. Having packed every square inch of the National Mall with monuments to every war they wanted to admit to, including the wars on Vietnam and Korea, and including the two world wars, our dear leaders have decided that another World War I monument is needed, and that it will be built in Pershing Park (named in 1981 for a World War I general by then already sufficiently forgotten). 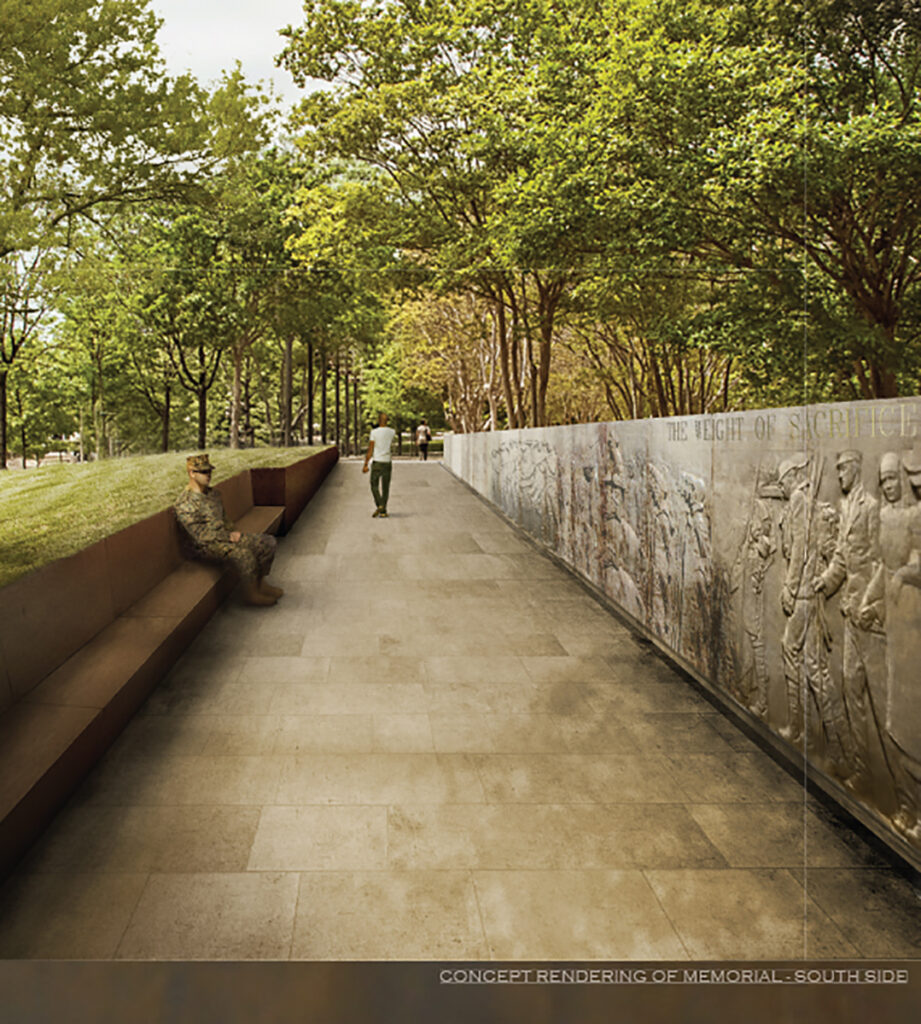 That’s presumably not a reincarnated WWI vet on the bench above, but a young soldier inhaling the glory of past noble slaughters.

This new glorification of mass killing is supposed to be finished by Armistice Day 2018, or what we now know as the opposite of Armistice Day, namely Veterans Day. The symbolism is stark. At the century mark of the conclusion of the war to end all wars, a peace holiday that was transformed into a war holiday during the war on Korea will be celebrated by an empire intent on glorifying all past wars in order to keep having new ones.

A WWI memorial is the reductio ad absurdum of the argument for glorifying all wars. When Victor Berger pointed out that all WWI gave the United States was the flu and prohibition, it was too early to add WWII and the military industrial complex and the oppression of the Middle East that would be resented to this day to that list. But the U.S. public resoundingly agreed with him. Public disgust created the most peaceful period in U.S. history following the armistice. The U.S. government was compelled by popular action to take the lead in legally banning all war with the Kellogg-Briand Pact, which is still on the books. Public demand also almost created a requirement for a public referendum before the United States could (illegally) launch a war — a step that might have radically changed the past 100 years. 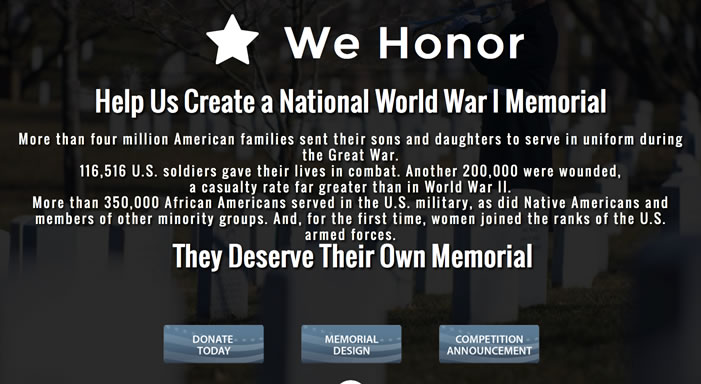 Where’s a memorial to those who went to prison for speaking against the madness of the “Great War”? Where’s even the most basic information on how the war was sold, and how it was understood once it ended? Nothing of the sort is to be found on the website of the monument makers. Woodrow Wilson’s lies about the Lusitania and German atrocities in Belgium created the modern field of war propaganda and led to widespread doubt, misplaced as it turned out, of later tales of Nazi atrocities. But the people intent on memorializing wars once the wars are old enough to not mean anything mention none of that. In fact, they simply quote Wilson’s malarkey without comment, as if it bore some relationship to what actually happened. This would be like carving Colin Powell’s U.N. Speech onto an Iraq War memorial in 2103, which I’m sure has already been planned. Quoth Wilson: 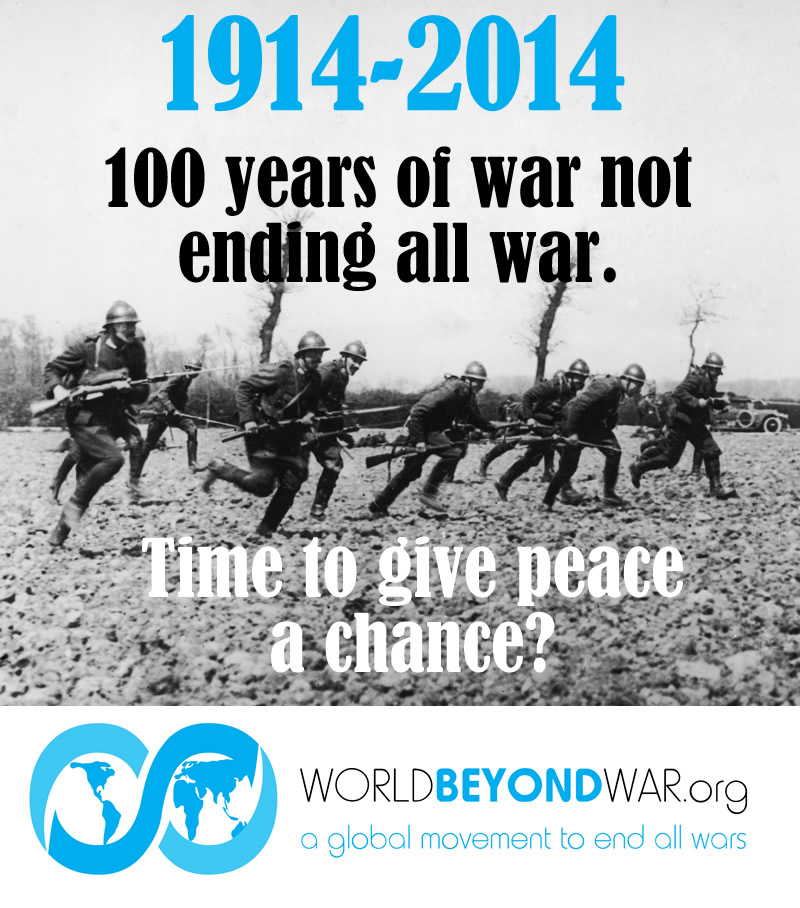 “The world must be made safe for democracy. Its peace must be planted upon the tested foundations of political liberty. We have no selfish ends to serve. We desire no conquest, no dominion. We seek no indemnities for ourselves, no material compensation for the sacrifices we shall freely make. We are but one of the champions of the rights of mankind. We shall be satisfied when those rights have been made as secure as the faith and the freedom of nations can make them…. It is a fearful thing to lead this great peaceful people into war, into the most terrible and disastrous of all wars, civilization itself seeming to be in the balance. But the right is more precious than peace, and we shall fight for the things which we have always carried nearest our hearts—for democracy, for the right of those who submit to authority to have a voice in their own governments, for the rights and liberties of small nations, for a universal dominion of right by such a concert of free peoples as shall bring peace and safety to all nations and make the world itself at last free.”

This was just after Wilson had won an election falsely promising peace, and immediately after the U.S. ambassador to Great Britain, Walter Hines Page, sent a cable to Wilson on March 5, 1917, reading in part:

“The pressure of this approaching crisis, I am certain, has gone beyond the ability of the Morgan financial agency for the British and French governments. The financial necessities of the Allies are too great and urgent for any private agency to handle, for every such agency has to encounter business rivalries and sectional antagonism. It is not improbable that the only way of maintaining our present preeminent trade position and averting a panic is by declaring war on Germany.”

When peace had been made with Germany ending World War I, President Wilson and his allies punished the entire population of Germany, leading numerous wise observers to accurately predict World War II. Jane Addams, E.D. Morel, John Maynard Keynes, and others predicted that the harsh vindictiveness of the treaty would lead to a new war. They seem to have been right. Combined with other factors, including Western preference for Nazism over Communism, and a growing arms race, bitter resentment in Germany did lead to a new war. Ferdinand Foch claimed the treaty was too lenient on Germany and would therefore create a new war, which is of course also true if one considers the possibility of having completely destroyed Germany or something close to that. Woodrow Wilson predicted that failure of the United States to join the League of Nations would lead to a new war, but it is far from clear that joining the League would have prevented the war.

Oblivious, and honoring Wilson as the Obama of his day, our monument makers just quote what Wilson said rather than what he did: “It must be a peace without victory…Victory would mean peace forced upon the loser, a victor’s terms imposed upon the vanquished. It would be accepted in humiliation, under duress, at an intolerable sacrifice, and would leave a sting, a resentment, a bitter memory upon which terms of peace would rest, not permanently, but only as upon quicksand. Only a peace between equals can last.” As devotees of our current president would say: at least he knew what he should have done, and that’s what matters.

When peace came, Wilson kept U.S. troops in Russia to fight the Soviets, despite earlier claims that U.S. troops were in Russia in order to defeat Germany and intercept supplies bound for Germany. Senator Hiram Johnson (P-CA) had famously said of the launching of the war: “The first casualty when war comes, is truth.” He now had something to say about the failure to end the war when the peace treaty had been signed. Johnson denounced the ongoing fighting in Russia and quoted from the Chicago Tribune when it claimed that the goal was to help Europe collect Russia’s debt.

The monument website displays a tasteful selection of WWI posters. No “mad brute” depiction of Germans as apes. No Jesus siting down his rifle for God. And the role of WWI in generating the permanent propaganda of patriotic war normalization is thoughtlessly hyped: The “Star Spangled Banner” became a national song to be played at sporting events during World War I, thus reviving, a century after the War of 1812, another pointless war that got the United States nothing but death, disease, and a burned capital.

I need to thank Sam Husseini to alerting me to the fact that the WWI monument people held a press conference, which he attended, at the National Press Club on Wednesday. Here’s audio of what they told him when he raised concerns. Rather than discuss what in the world the point of the war could have been, it seems that the monument makers predictably enough talked about the “brotherhood” of the troops. But when Sam asked whether that brotherhood extended across nationalities, as it did during the Christmas Truce, they responded by talking about the greatness of the United States. Here’s an excerpt:

“And looking at photographs from Vietnam and there’s themes that you see … from WWI of the way people support each other and the way conflict changes everybody. But this is a really interesting opportunity because it is that starting point for the United States. . . .

“Does that sense of brotherhood transcend nationality?”

“Well, yeah, I mean you ask me what’s the factor here . It’s not a glorification of war that we’re dealing with here, it’s ultimately a glorification of humanity and the coming together of all these different races for the United States. So, in the compositions there’s not a single figure that’s alienated, every single figure is interconnected with the rest. These are touching the other figures or they’re looking at each other. There’s no sense of isolationism or aloneness. That’s much more of a modern concept. So going back to the idea that there’s this sense of unity in the universe, this sense of order. And that’s what the relief was about….”

“My question was is this brotherhood constrained by nationality and you seem to be saying that it is.”

So, apparently in the new version of World War I the military and the nation had already been integrated, and the civil rights movement wouldn’t be needed, and nobody was being lynched? I actually wouldn’t object to a historically accurate monument to racial harmony and diversity. If that’s what these guys think they’re building, I say: build it! Just leave out World War I, OK?

The winning monument design was apparently called “The Weight of Sacrifice.” It’s a temple to human sacrifice. The trick will be to get people in the 21st century to believe that the human sacrifice was for some good purpose — and that it could be again.  Never underestimate the power of propaganda.