5 Refugee Camps in Mud on the Greek-Macedonia Border 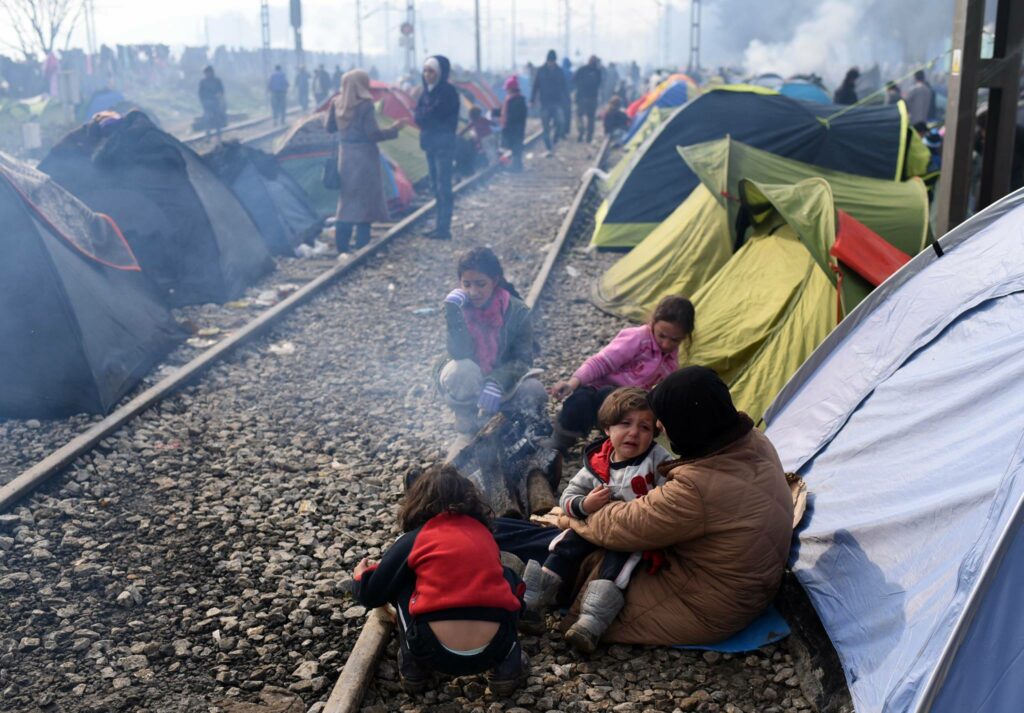 “If you don’t like refugees coming to your country, stop voting for politicians who love to bomb the shit out of them.”  Our delegation from CODEPINK: Women for Peace saw this written on a tent at the Idomeni refugee camp in on the Greek-Macedonian border:  As we well know, either the Greek nor Macedonian governments have bombed people, but they are having to deal with the huge numbers of refugees caused by the decisions of government far away.

The Obama administration which inherited the chaos from the 2003 Iraq war from the Bush administration but that has been bombing ISIS in urban areas in Iraq and Syria has resettled only 1,736 Syrian refugees over the last seven months—despite President Obama’s pledge to resettle at least 10,000 Syrians by September 2016. In contrast, Canada has resettled more than 26,000 Syrian refugees since late 2015, while Turkey, Lebanon and Jordan have together taken in millions of Syrian refugees since the conflict began five years ago.

In early May, we had flown from Athens to Thessaloniki, Greece’s second largest city, and then had driven one hour north to the Greek border with Macedonia.  The name of the tiny hamlet of Idomeni has become synonymous with the largest refugee camp in Greece.

As we arrived, a tremendous thunder, lightning and hailstorm hit the area ripping down tents, making mud pools and deluging tents and the clothing and bedding inside. We saw the worst conditions (except cold and snow) that the 13,000 refugees must endure in five camps within 4 miles of the Macedonian border. All five are “informal, unofficial” camps and refugees can come and go at will.  They have refused any attempt to put them into the formal “detention” camps that place them in isolated areas and restrict their movement within Greece. As a result, the services provided are not particularly well organized although all have limited porta-potties, showers and faucets for washing clothes.  All have basic food provided primarily by volunteers, non-governmental organizations and the Greek military (in only one camp).

The first camp one comes upon on Highway 75 heading north from Thessaloniki is at the gasoline station and rest stop called EKO.  Over 2,000 persons are camping in the large parking lot, grocery store and car wash.  Save the Children provides rice porridge and oranges daily for children under 11 years of age and estimates there are over 1,000 children.   We helped hand out the porridge by going tent by tent and asking how many children of that age group were in the household (tenthold).  Save the Children coordinators told us that they liked having the daily contact with people in their living space rather than having people stand in another long line.  We were greeted with a warm smile and a thank you by every mother to whom we delivered the porridge.  The Boat Refugee Foundation of the Netherlands has a number of volunteers that help with the porridge delivery-young women and men from the Netherlands, Ireland, Sweden and the UK.

At EKO camp we met a distinguished man who told us he was a mathematics teacher in a small village outside of Damascus, Syria.  He and his 13 year old daughter made the trip from Syria, through Turkey, by boat to Samos, ferry boat to Piraeus, train from Athens to Thessaloniki and taxi to EKO camp.  He had been at the camp for 1 month and 3 weeks.  He left his wife and 17 year old daughter behind in Syria

Leaving EKO camp, we stopped at the Park Hotel on the outskirts of the village of Polikastro where the volunteer headquarters is located.  Each night at 8pm, experienced  volunteers provide an orientation for new volunteers and update everyone with the day’s happenings.

In the back of the Park Hotel is the kitchen of Hot Food Idomeni, a group of volunteers that cook basic meals of staples such as rice, beans and curry in large vats for 5000 persons each day.  Paul of the United Kingdom heads up the volunteer force of 45 persons.  Two shifts of 15 people prepare the meals and two groups of another 15 load up the food, drive the food to the camps and distribute it. Paul said that they are spending about $2000 per day for food and transporting the food for 5,000. The Greek military feeds one of the other camps and has called on Hot Food Idomeni to help them when their food ran out.  Hot Food Idomeni is a remarkable place to work as a volunteer and it’s a great organization to send donations as their work is definitely keeping people alive.  Donations can be made through https://www.youcaring.com/hot-kitchen-idomeni-546626

After the Park Hotel we stopped at the 500 person camp called Lidl, named for a nearby merchandise store.  Most persons live in white tents provided by the Greek military.  The tents are in long military precision lines next to a small runway. The military does not let new volunteers into the camp, only those affiliated with organizations.

Next we visited the Hara camp, named for gasoline rest stop and nearby hotel.  500 persons are camped around the gasoline station area.  Norway’s Northern Lights Aid group is nominally ‘in charge’ of the camp and provided tents, coordinates clothes distribution and has a sundry item purchase for refugees.  Charlie and Henry formed Northern Lights after they worked for months on Lesvos and when volunteers were displaced by the detention center staff, they came to the Macedonian border to help with refugees there.  Hara has a much different atmosphere as it is a smaller camp and the attention given by Northern Lights volunteers, including four from Poland and the Czech Republic when we were there has much to do with that more positive environment.  Donations can be made through NorthernLightsAid.org.

Idomeni is a sprawling camp within 500 meters of the Macedonian border and has around 10,000 persons.  One Doctors without Borders (MSF) staff told us that no one knows the exact number as refugees are coming and leaving at will.  The camp has been open as a stop for refugees who were able to cross into Macedonia prior to March 22 and go into Europe.  Now those in the camp are stuck.  They must remain in the camp until a decision is made on their individual cases.  Some have been in the camp for 9 weeks.

Greek police have two large buses that block the railroad tracks between the camp and the border. Many of the refugees have placed their tents on the railway line.  Others have their tents in the fields which became mud pits with the heavy rain we witnessed on the day we arrived.  Parents were cleaning out the tents of mud and rain that had poured in, hanging up clothes, blankets, and sleeping bags on the fences along the railroad track.

Not everyone is sleeping in small tents. Two large UNHCR temporary tent buildings have approximately 100 bunks in them arranged much like the overcrowded prisons in the U.S.  People make privacy areas from the blankets hanging down from the upper bunks.

Four dinner lines began forming in the late afternoon.  The four feeding locations had hundreds of people lined up for simple meals of beans and rice, and a couscous type meal.

As with any refugee camp, industrious sellers have begun.  Some had small amounts of coffee, powdered milk, crackers, eggs for sale.  Those who had purchased food were cooking it over wood fires from trees they were chopping down, not an enduring move to local residents in the area.

Millions of refugees await their fate and future in Greece, Turkey, Lebanon and Jordan as the international community slowly decides how to handle the flood of people fleeing chaos in their countries caused by military operations.  Millions of others hope that their arrival in Europe will provide them an opportunity for a life without conflict until they can return home.

In the year of Presidential election in the United States, the reminder written on a refugee tent in Greece is one voters should heed: “If you don’t like refugees coming to your country, stop voting for politicians who love to bomb the s**t out of them.”

About the Author:  Ann Wright served 29 years in the US Army/Army Reserves and retired as a Colonel.  She served as a US diplomat for 16 years in US Embassies in Nicaragua, Grenada, Somalia, Uzbekistan, Kyrgyzstan, Sierra Leone, Micronesia, Afghanistan and Mongolia.  She resigned from the US government in March 2003 in opposition to President Bush’s war on Iraq.  She is the co-author of “Dissent: Voices of Conscience.”